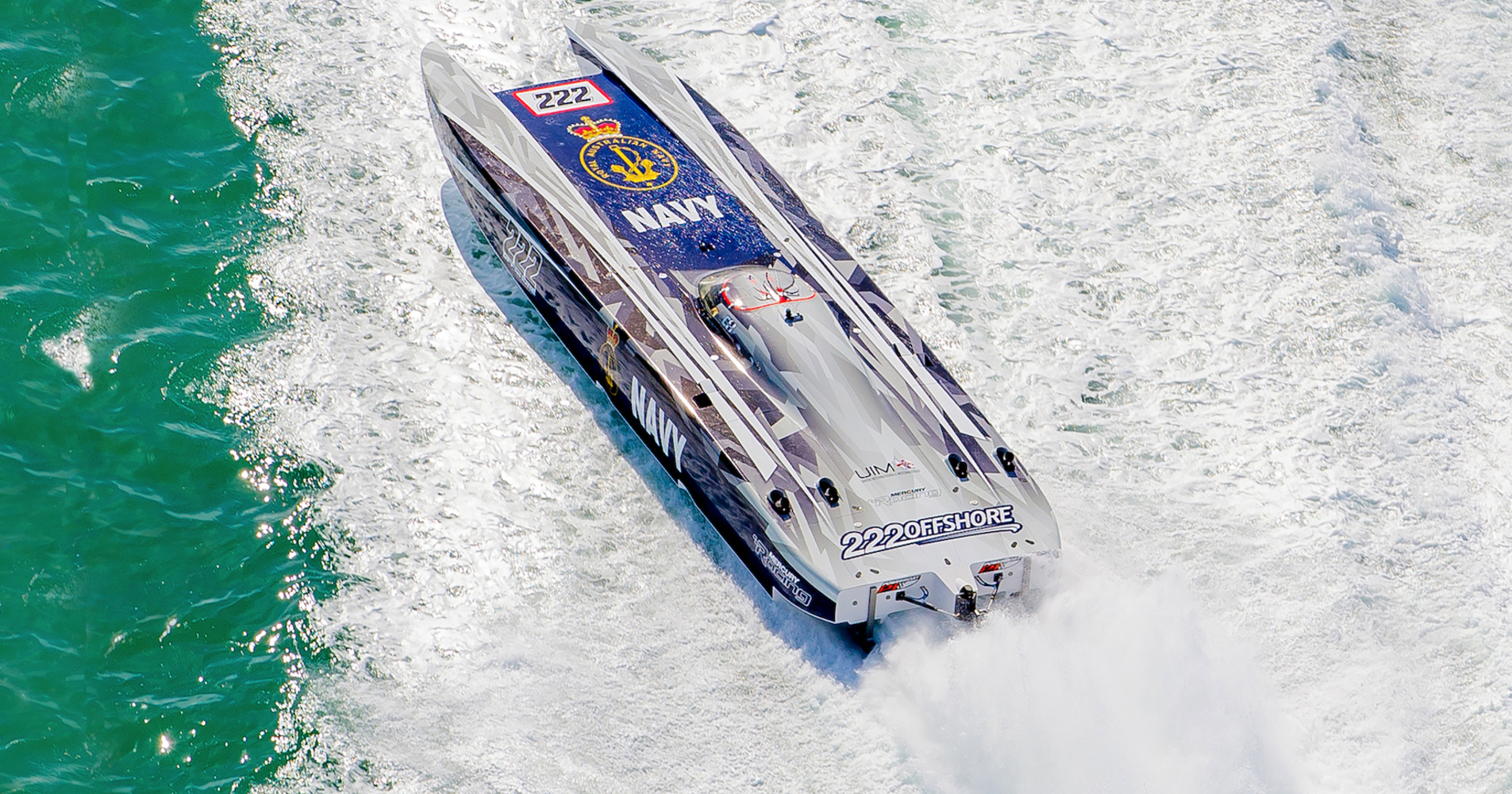 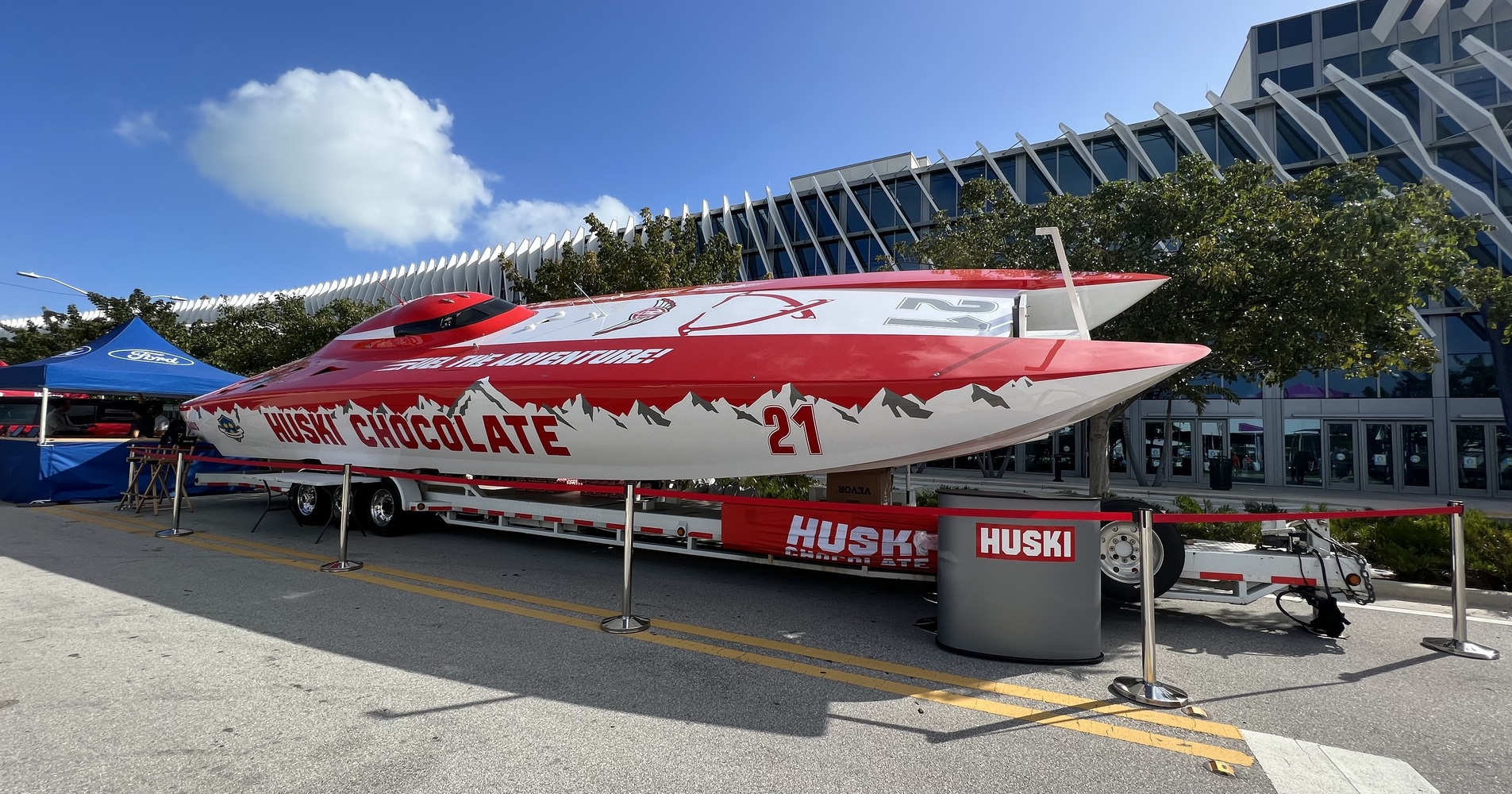 Huski at the Miami Boat Show earlier this year 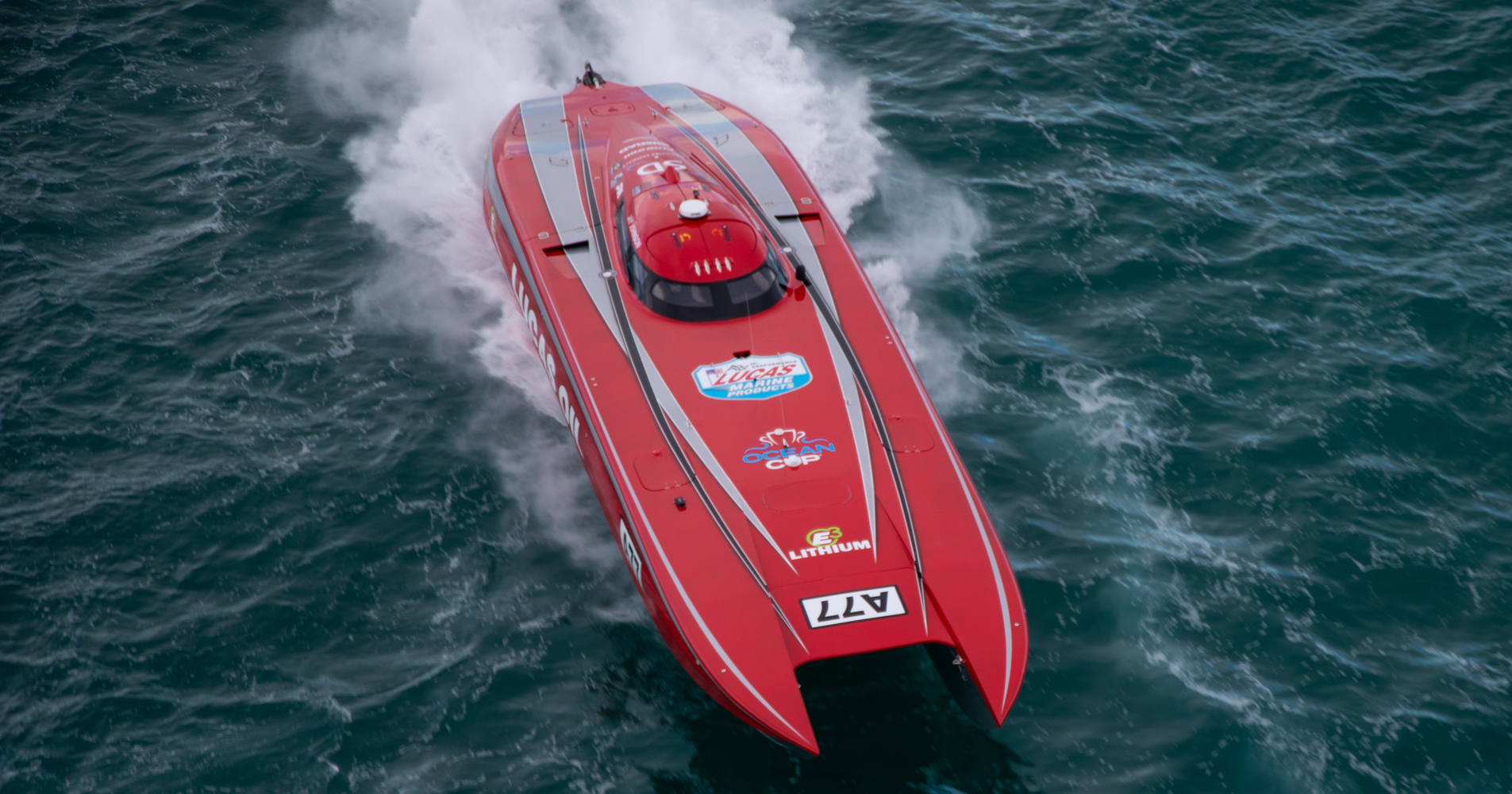 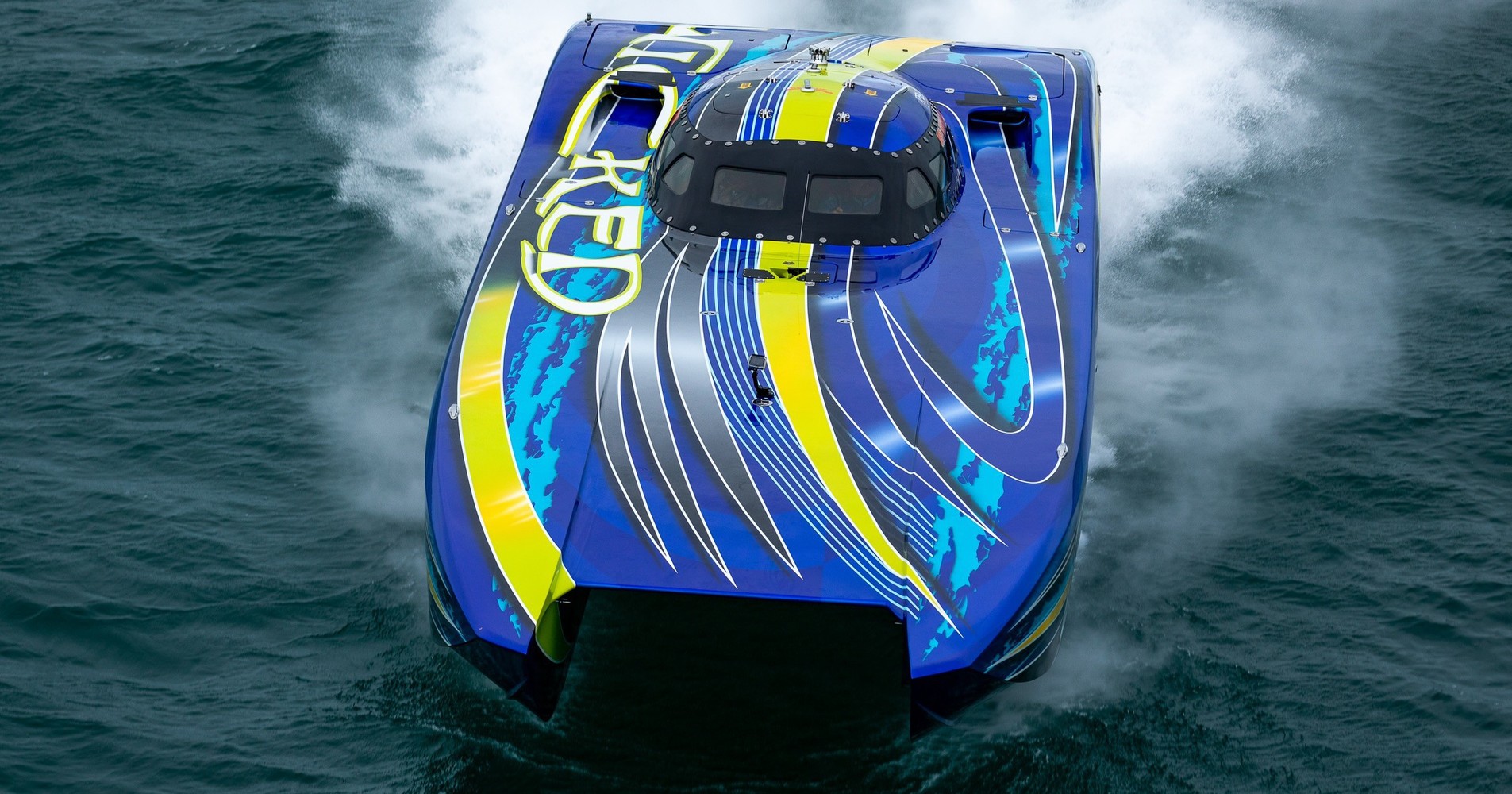 My passion for Class 1 racing is as strong as ever and I am delighted to have the opportunity to help take it back to the top of the sport where it belongs. As part of the new Huski team I’m looking forward to racing against teams from outside the United States over the next seven months.
Steve Curtis MBE, Throttle
Huski Racing

Final preparations are underway for the opening event of the UIM Class 1 World Championship with six teams from three continents about to head to Cocoa Beach on Florida’s Space Coast. The international fleet reflects the momentum that has returned to the premier class of offshore racing with new boats and racers joining familiar faces in the six-venue series.

Veteran British racers Steve Curtis and Miles Jennings are still hungry for success to add to their long list of world titles. Curtis, who became the youngest ever Class 1 champion at the age of 21 and now ranks as the most successful offshore powerboat racer in history, will be joined by Britt Lilly in Huski Racing’s 47-foot catamaran. Speaking from the team’s base in Stuart on Florida’s Atlantic Coast, Curtis said: “My passion for Class 1 racing is as strong as ever and I am delighted to have the opportunity to help take it back to the top of the sport where it belongs. As part of the new Huski team I’m looking forward to racing against teams from outside the United States over the next seven months.”

Jennings is still in England, where at the weekend he won the Round The Island race in the UKOPRA World Offshore Championship, and he will join throttleman Alex Pratt in Florida next week for testing in the 345 Racing team’s 42-foot Victory hull boat. This new Cayman Islands team owned by Mario Rankin will be sponsored by XINSURANCE, and Jennings commented: “Class 1 has the best boats, best crews and the best equipment. The Mercury Racing 1100 turbos have bought a modern, reliable package to the class and Powerboat P1’s national and international TV broadcast deals and live streaming take the racing into fans’ homes worldwide.” P1 CEO Azam Rangoonwala said: “The pairing of Alex and Miles is an exciting addition to our international fleet and it will see 27-year-old Alex become the youngest racer in the championship. Miles has racing in his blood having started his career in the 1970s and his titles include 5-times world champion and 12-times British champion.”

Earlier this year the 222 Offshore team, who finished runners-up in the 2019 Class 1 Championship, announced that it would be returning to the series. The team was grounded in Australia throughout the pandemic due to international travel restrictions and driver Darren Nicholson said: “It has been a difficult time in general over the last two years and it’s great to be returning to the US and go Class 1 racing again. We’ll be looking to go one better than when we finished second behind the Dubai-based Victory Team three years ago.” Alongside Nicholson will be Italian throttleman Giovanni Carpitella, an experienced competitor across many racing disciplines.

For some time I’ve wanted to get involved with offshore racing and be part of an international series, and I regard Class 1 as the pinnacle of the sport. I’ll be racing a 48-foot Outerlimits Cat and will have New Zealander Chris Hanley as my driver.
Mike Falco, Throttle
Team Defalco

Based in the Florida Keys will be the highly experienced JBS Racing team of Jeff Stevenson and Micheal Stancombe in their 42-foot MTI catamaran. Team owner and driver Stevenson has enjoyed a successful racing career, including becoming national and world champion and being inducted into the Hall of Champions when racing with Team Donzi. Speaking from his home in Key Largo he commented: “I’m so excited about joining Class 1. It’s mythical. It’s as real as it gets – we’re like gladiators getting ready for battle.” Based in Indianapolis as a consultant in the marine industry and with a home in Sarasota, Stancombe has competed in many classes over the past 33 years and he described Class 1 as “racing with the best of the best.”

Flying the flag for New York City will be Team Defalco, owned by its throttleman Mike Falco who is Founder, President & CEO of Defalco Construction, one of the premier open shop cast-in-place concrete foundation and superstructure subcontractors in the city. “For some time I’ve wanted to get involved with offshore racing and be part of an international series, and I regard Class 1 as the pinnacle of the sport,” explained Falco. “I’ll be racing a 48-foot Outerlimits Cat and will have New Zealander Chris Hanley as my driver.”

Another highly experienced British racer who will be in the Class 1 fleet this season is California-based Nigel Hook in his familiar red Lucas Oil boat. With him in the cockpit of their 52-foot Mystic catamaran will be American driver Jay Johnson. Hook raced in the P1 World Championship back in 2009 and together with his friend Johnson he has set a number of world records in recent years for endurance runs such as crossing the Straits of Florida from the Florida Keys to Havana and The Rum Run from Huntington Beach around Catalina Island.

In October 2020 the UIM assigned to Powerboat P1 the international rights to Class 1 offshore racing in an exclusive ten-year agreement and P1 CEO Azam Rangoonwala said: “The decision by new teams to enter UIM Class 1 this year is superb news in respect of our aim to grow the class in the United States and at the same time develop plans to globalise the series over the coming years with a strong line-up of international teams and both national and worldwide TV coverage plus live streaming.”

Class 1 is the premier class of offshore powerboat racing in the world and is considered to be one of the most spectacular marine motorsports. A Class 1 race boat has twin inboard 1100HP engines and can reach speed in excess of 160mph. All boats are limited by a minimum weight of 4,950kg.